Confessions of a Terrorist

In a claustrophobic concrete cell, two men face each other across a bare table. One is a wanted terrorist, the other a British intelligence officer. But this is no ordinary interrogation, and as they talk deep into the night and violent secrets are revealed, the line between interrogator and confessor begins inextricably to blur. Who, then, is the real terrorist? And will they pay for their guilt in blood? The debut novel by world-renowned terrorism expert Richard Jackson, Confessions of a Terrorist is a provocative, tense and ultimately shocking portrayal of how far both individuals and governments are willing to go to defend their beliefs. 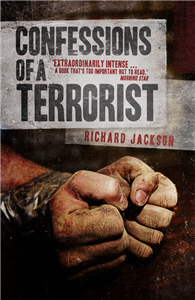 An extraordinary, provocative novel that fundamentally questions deeply held beliefs about what makes a 'terrorist'.

On a breathtaking journey through the intricacies of a counter-terrorism interrogation, Richard Jackson asks us to confront one of the most difficult truths of our time: that to identify "the terrorist" is to look in the mirror and see oneself.' - Elizabeth Dauphinee, author of The Politics of Exile 'Extraordinarily intense ... A book that's too important not to read.' - Morning Star 'Jackson has written a page-turning and thought-provoking book. Although its characters are invented and the dialogue imagined, the reading experience is uncomfortably closer to non-fiction than fiction.' - Richard Falk 'Does a remarkable job at capturing the deadly spiral of violence characterized by state and non-state terrorism today ... The dialogue is a tour de force.' - Critical Studies on Terrorism 'Goes beyond the prevailing narratives of terrorist behaviour and delves into the thought processes of a terrorist, giving us unique insights into the "mind" of a terrorist.' - Pambazuka News 'Confessions of a Terrorist offers an outstanding contribution to the academic and fictional literature on terrorism.' - Journal of Intervention and Statebuilding

Richard Jackson is one of the world's leading experts on terrorism and Professor of Peace Studies at the University of Otago, New Zealand. He is a regular media commentator and maintains a popular blog at https://richardjacksonterrorismblog.wordpress.com. This is his first novel.