Chasing Columbus is the first in a breathtaking new series of four books bringing the past into the present. Never have the events of history seemed as pertinent to the modern day as Guy Trepanation battles against evil forces of conspiracy intent on destroying him and changing the course of history. A fast paced adventure thriller that takes the reader on a journey from the Caribbean to Asia. CHASING COLUMBUS Adventure devotees will love this one as the author creates a host of ruthless, ambitious characters. Who, for both good and evil reasons are all intent on possessing the legendry ‘Columbus and Tucker Crosses’. Originally discovered by Columbus on his epic voyage of discovery and mysteriously spirited away amidst a background of deceit and intrigue, the hunt is on for these two ancient legendary religious icons. The priceless value and power which these crosses allegedly posses is the theme and lure of for this action packed thriller, which carries you through a host of different historical times, facts and places, which the author skillfully and gradually brings together via a roller coaster ride of complex and exciting escapades transporting you from Europe to the Caribbean in this nail biting story. 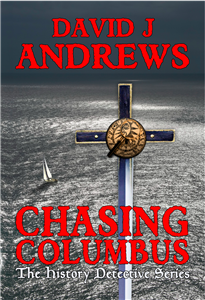