From Caste to Class

Changing Electoral Politics in Delhi is an in-depth analysis of voting patterns of voters in Delhi. Rapid immigration has changed the social profile of Delhi’s voters who seemed to vote more on class lines than caste as witnessed in many states. During Partition, the city had witnessed large-scale migration from Pakistan. Recent decades have also witnessed an influx of people to Delhi from various states. Subsequently, the demographic profile of Delhi has changed with a sizeable majority of migrants in many assembly constituencies. This transformation has a distinct impact on the electoral politics. Since Delhi attracts people from various states and regions, it has resulted in a cosmopolitan culture. As compared to the past, class differences have become sharper now, reflected not only by people’s perception and attitude regarding various issues, but also when it comes to voting. By using first-hand survey data of a cross section of voters, the author demonstrates the voting patterns of the last four assembly elections and illustrates how class is more important than caste in Delhi’s politics today. 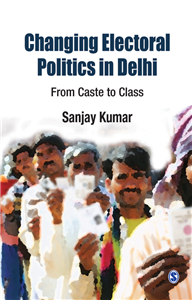