When her office mate, accountant Susan Neh, brings Angelina Bonaparte a client named Adriana Johnson, the PI wonders how she can help this bedraggled young woman.   Adriana’s parents, immigrants from the former Yugoslavia, were murdered only a week earlier, in a robbery at their small hardware store. Now she has discovered that, despite living like the working poor, they were actually quite wealthy––with numerous large bank accounts located around the world.  Adriana is suspicious about her newfound status and hires Angie to discover the nature of her deceased parents’ wealth.  When Angie arrives to interview with the parents’ attorney, Herman Petrovitch, he is missing, but his secretary Dragana is there––lying dead on the office floor, with her head blown off.  Homicide detective––and Angie’s own boyfriend––Ted Wukowski, cautions her against getting involved in the murder investigation.  Of course, Angie pays little heed to his warning.

Angie realizes immediately that Adriana’s concerns about her parents’ money are probably well- founded and, even worse, that the young woman may be in great danger herself.   She secures the assistance of her father’s rotund attorney, Bart Matthews, who quickly arranges for protection for Angie’s young client, while Angie begins to look into Adriana’s parents’ background.  In their family home, she discovers some strange artifacts in the attic, along with what appear to be Serbian military uniforms and an ethnic wedding dress.  Her investigation soon leads her to suspect a connection between Adriana’s parents, Attorney Petrovitch, and the Bosnian War of the 1980s.  How or why are they linked? Angie doesn’t know, but she’s as determined to find out as others are determined to prevent her from doing so.  So she’d better watch her back, because someone knows about the money in those bank accounts and they don’t intend to let Adriana inherit it. 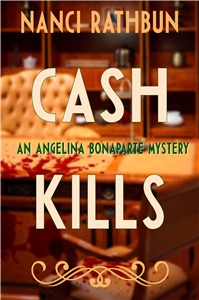 Nanci Rathbun is a lifelong reader of mysteries – historical, contemporary, futuristic, paranormal, hard-boiled, cozy … you can find them all on her bookshelves.  She brings logic and planning to her writing from a background as an IT project manager, and attention to characters and dialog from her second career as a Congregationalist minister. Her first novel, Truth Kills: An Angelina Bonaparte Mystery, is out in both paperback and ebook formats. The first chapter is available free on her web site and on her Goodreads page. Cash Kills is the second book in the series. Number three has a working title of Deception Kills, with plans to publish in 2015.

Nanci is a longtime Wisconsin resident who relocated to Tennessee to be closer to her granddaughters – oh, and their parents – and is planning an upcoming move to San Francisco for the same reason. No matter where she lives, she will always be a Packers fan.

She loves to hear from readers.  Contact her at: