1980 President Carter’s chances of reelection are destroyed by the failure of the mission to rescue the hostages held in Iran. In the aftermath, the Iranians claimed to have discovered nine US bodies at the desert location where the mission disintegrated into panic and explosion, while the US authorities stated that only eight men were missing. Years later, an English monk – once an intelligence officer in Northern Ireland, whose life was torn apart by a disastrous undercover operation that led to his parents’ murder receives a US tycoon’s deathbed confession that he was part of a sinister and successful conspiracy to sabotage the rescue. The monk is then dragged back into a world of threats and violence, with the original conspirators bent on keeping the plot and its murderous legacy buried by any means necessary.Who organised the greatest political coup of the 20th century, and what is the identity of that ninth man found dead in the Iranian desert? The Carter Conspiracy weaves a web of ingenious and utterly believable fiction around true historical facts 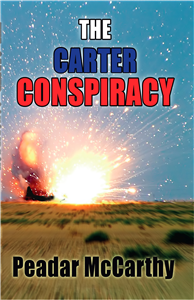