Billy Jones wasn't famous. He was just an ordinary dog living with his family in No. 7 Panteg Road. He lived with Mam and Dad Jones and their children, Catrin aged eleven, Tom aged 10 and Emma who was nearly seven and a half. The Jones family weren't exactly an ordinary family - they had all been on the stage and loved performing. Eventually Billy has a great opportunity to match his fellow family members when an advertisement appears in the paper 'Dog actor wanted for Christmas pantomime'. Preparing for the audition sparks great enthusiasm and Billy simply enjoys acting. The audition arrives and the dogs are ready. ThereTina Timpkins, the Yorkshire terrier - too small, Silas, the daschund - too snappy,Tanwen, the corgi - too bright and eventually Billy - just perfect! Well, that's what he thought. But extremely serious Humphrey got the part. Disappointed Billy returns home and he saves Mrs Bartley nextdoor from having a very nasty accident. Now he's a star, a real star, and his story is featured on the radio, television and in the newspapers. And that's how Billy became famous. 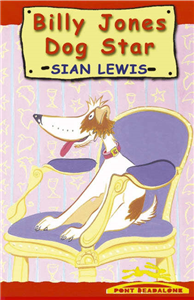 Gomer Press is a printing and publishing company based in Llandysul, west Wales. The company was first established in 1892 and is owned by the same family to this day. Jonathan Lewis, the great grandson of the company's founder, is the current managing director. Gomer Press today is both a thriving printing company and the largest publishing house in Wales.

Gomer Press has chosen to review this offer before it proceeds.