One of Egypt’s leading literary voices offers a first-hand look at political, social, cultural events of the last 40 years and how they influenced his writing.

Ibrahim Abdelmeguid, called “the quintessential writer about Alexandria” by The National newspaper, looks back over his decades-long writing career this book, which what he calls a “literary autobiography.” In it, he reflects on the social, political, and cultural influences in Egypt and elsewhere that have shaped him as a writer.

He shares his views on major political events, such as the 1967 defeat after the Six-Day War, and explanations of their profound impact on his personal life and works of fiction. Abdelmeguid devotes a portion of his work to discussing the development of his views on Egypt’s second president, Gamal Abdel Nasser, over the course of his turbulent tenure in office.

The book is divided into a brief introduction and four chapters. Abdelmeguid guides the reader through his literary career, moving masterfully between the factual and the meditative. He explores how each of his novels and many of his short stories was conceived. He also describes cultural, political, and social contexts in which his writing evolved and was received by literary critics and casual readers.

He spends considerable time describing the creative process behind his Alexandria trilogy— No One Sleeps in Alexandria, Birds of Amber, and Clouds Over Alexandria. The first book, No One Sleeps in Alexandria, is set during World War II. Abdelmeguid visited numerous key sites in Alexandria and surrounding areas and read every newspaper he could get his hands on. The result of his devotion to research is a vibrant portrayal of Alexandria that shines throughout the epic novel. Of particular note is his successful communication of the cultural and religious diversity of the city and the impact of that on the promotion of a culture of tolerance.

Beyond Writing is a rare and important addition to the modern Arabic literary map. Few Arab authors are willing to so transparently share their writing process, preferring to highlight the polished final product while concealing the hard work that brought it into existence. Readers are lucky that it is a writer as prominent, thoughtful, and engaging as Abdelmeguid is willing to draw back the curtain. 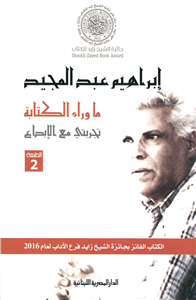 Winner of the 2016 Sheikh Zayed Book Award for Literature

“The book does not fail to enthral the reader with both Abdel Meguid’s capable storytelling and fluidity. It also sheds light on the untold or ‘under-told’ elements of the creative process.” —The National

Ibrahim Abdelmeguid was born In Alexandria in 1946. He graduated from the faculty of Arts with a Philosophy degree before relocating to Cairo in 1974 where he began his writing career. Abdelmaguid has written more than 15 novels, five collections of short stories, and several theatre plays. He wrote numerous novels including No One Sleeps in Alexandria, Birds of Amber, and The House of Jasmine. Abdelmaguid’s works have been well received around the world and have been translated to English, German, Italian, Spanish and French. He has received numerous prizes and accolades including Naguib Mahfouz prize from AUC press in 1996 and the Prize of State in 2007 for his contributions to literature. His work has also been longlisted for the International Prize for Arabic Fiction.