A Political Artist in Revolutionary Times

Ludwig van Beethoven entered university the year that the French Revolution broke out. He went on to live through the Reign of Terror, the rise and fall of Napoleon, the battles of Wagram and Leipzig, and the era of political repression following the Congress of Vienna. Interpretations of Beethoven’s music have tended to emphasize the composer’s personal suffering and inner struggles over the political resonance of his work. Yet, as William Kinderman’s brilliantly written study shows, Beethoven’s life and art were shaped in far-reaching ways by the turbulence of his era. Starting with the composer’s formative years in Bonn, Kinderman reevaluates the political implications of Beethoven’s art, revealing how musical tensions in his major works symbolically played out the real-world struggles of his time. Written for the 250th anniversary of his birth, the book also takes stock of Beethoven’s legacy, assessing his growing worldwide appeal amid the political challenges that confront us today. Kinderman movingly considers how the Fifth Symphony helped galvanize resistance to fascism, how the Sixth has energized the environmental movement, and how Beethoven’s civic engagement will continue to inspire in politically perilous times. 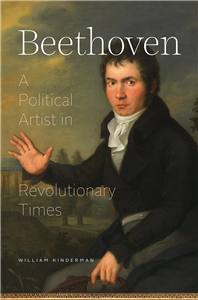 All language rights available, except German.

William Kinderman is professor of music and the Leo M. Klein and Elaine Krown Klein Chair in Performance Studies at the University of California, Los Angeles. His many books include Beethoven, The Creative Process in Music from Mozart to Kurtág, and, most recently, Wagner’s “Parsifal.”