An American Witness To India's Partition

This volume is a collection of Phillips Talbotâ€™s letters written between 1938 and 1950, on the buildup to the independence of India and Pakistan, and the early experiences of the new states. Talbotâ€™s letters and reports from the field, presented here in the original, include his first-hand observations on student life at Aligarh Muslim University, local life in a small Muslim community in Kashmir, a Vedic ashram in Lahore, Tagoreâ€™s Shantiniketan, Gandhiâ€™s Sevagram, the Kodaikanal Ashram Fellowship, and Hindu and Muslim urban communities in Lahore and Bombay, and Afghanistan. For anybody wishing to get a ground-level view of South Asian society in its decisive decade, these letters from an American observer promise to be an enjoyable read. 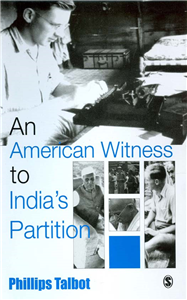