All of Them Vampires!

Vampires walk among us! At least, according to Anton Krieger they do. Krieger witnessed his first vampire kill when he was 19 in 1969. For 40 years he's tried warning the world of his existence. No one believes, but the vampires who think it's time he was silenced. The story brings together a conglomeration of sinister creatures, from a 170 year old vampire residing in an abandoned house in Highgate, to an occultist and master of the dark arts. Cassie, Krieger's beautiful daughter is herself seduced by the handsome John-Byron Sarony. While Sarony appears to be 26 years old, he existed since he became a vampire during World War II. There are also rumbles of the Old One, an ancient and powerful evil, spoken of in hushed whispers. Can Anton warn London before chaos reigns and the Old One is summoned? 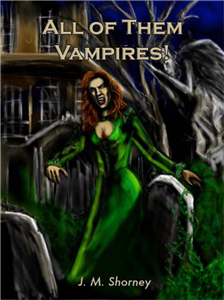