An Eskimo Memoir of the 20th Century

Elizabeth B. Pinson shares with us her memories of Alaska's emergence into a new and modern era, bearing witness to history in the early twentieth century as she recalls it. She draws us into her world as a young girl of mixed ethnicity, with a mother whose Eskimo family had resided on the Seward Peninsula for generations and a father of German heritage. Growing up in and near the tiny village of Teller on the Bering Strait, Elizabeth at the age of six, despite a harrowing, long midwinter sled ride to rescue her, lost both her legs to frostbite when her grandparents, with whom she was spending the winter in their traditional Eskimo home, died in the 1918 influenza epidemic.

Fitted with artificial legs financed by an eastern benefactor, Elizabeth kept journals of her struggles, triumphs, and adventures, recording her impressions of the changing world around her and experiences with the motley characters she met. These included Roald Amundsen, whose dirigible landed in Teller after crossing the Arctic Circle; the ill-fated 1921 British colonists of Wrangel Island in the Arctic; trading ship captains and crews; prospectors; doomed aviators; and native reindeer herders. Elizabeth moved on to boarding school, marriage, and the state of Washington, where she compiled her records into this memoir and where, now in her 90s, she lives. 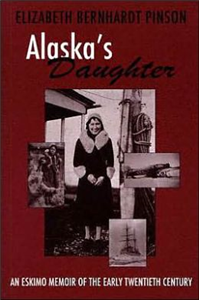