London Churches in the Age of Wren, Hawksmoor and Gibbs

The Great Fire that swept through London in 1666 is estimated to have destroyed at least thirteen thousand houses and some eighty-eight churches, including St Paul’s Cathedral. But this tragedy had a silver lining: it presented Christopher Wren with the opportunity to create one of the most impressive groups of buildings in the history of architecture. Wren was a man of extraordinary talents, a brilliant mathematician and astronomer and a founder member of the Royal Society. He readily turned his skills to architecture, and within days of the Fire he presented Charles II with a plan for rebuilding the City, replacing the narrow medieval winding streets with a regular, rational plan with grand avenues and vistas. This grandiose scheme came to nothing, but in 1667 Wren was appointed Surveyor in charge of rebuilding the churches. In the years that followed – and with the assistance of, among others, Nicholas Hawksmoor and Robert Hooke – he rebuilt St Paul’s and fifty-one churches. There is extraordinary variety in the solutions he adopted to solve the problem of building rational, classical buildings on irregular medieval sites. He also had the good fortune of being able to call on craftsmen of exquisite skill. Inside the churches woodcarvers including Grinling Gibbons and Jonathan Maine were given the opportunity to apply all their virtuoso craftsmanship. Outside, stone carvers created the urns, obelisks and finials which adorn the towers and steeples. The other central event in the story of London’s churches is the Fifty New Churches Act of 1710. Fifty was optimistic; but the dozen or so ‘Queen Anne Churches’ which resulted from the Act were wonderful. The most dramatic of them (St Anne Limehouse, Christ Church Spitalfields) were built by Nicholas Hawksmoor, who had been Wren’s assistant at St Paul’s and the City churches. Unlike Wren’s churches on their cramped medieval sites, most of Hawksmoor’s churches are on a larger scale, allowing scope for his bizarre genius for theatrical compositions and exaggerated proportions. But the pendulum of fashion was already swinging away from Wren’s and Hawksmoor’s Baroque towards the less extravagant neo-Palladian style. The book closes with the more restrained churches built by James Gibbs, whose St Martin-in-the-Fields, completed in 1724, became the prototype for many colonial churches, especially in North America, over the next hundred years. 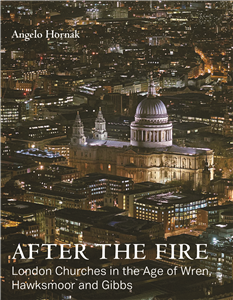 Architectural photographer Angelo Hornak has contributed to many books, including histories of St Paul’s Cathedral and Westminster Abbey, as well as the cathedrals of Canterbury, Winchester, Wells, Exeter and Ely. Balloon Over Britain is the story of his flight over Britain in a hot-air balloon with a basketful of cameras. London from the Thames takes the reader on a boat trip from the Thames Barrier in the east to Hampton Court in the west, exploring the historic river and the buildings and monuments on its banks.