A Poem of Remote Lives

Dying in poverty in a Dumfries nursing home in 1988, Werner Kissling left behind a single suitcase. It was filled with personal papers, photographs and lantern slides which suggested a unique life. They revealed the story of this German aristocrat whose life had mirrored and reflected the 20th century and who was passionately involved with the ordinary people of the Western Isles. This biography explores his extraordinary life and work.;Born in Silesia (then in the German Empire, but now part of Poland), in 1895, Kissling grew up in luxury, the second son of a wealthy brewing magnate and a mother who dabbled in the arts and particulary photography. In the suitcase at his death was the postcard sent by his mother from the Isle of Lewis in 1905 which inspired in Kissling a love of the Hebrides which was to last until his death.;After service in the Iron Guard in World War I, Kissling trained for a diplomatic career and in his first posting, in Latvia, took his earliest surviving photographs. His career eventually led him to London but by then he had fallen foul of the Nazis, and he was forced to flee the German Embassy in the early 1930s with Hitler's secret police hard on his heels. Taking again to his first love, the study of people, Kissling went on to make the first film in Gaelic, on the island of Eriskay and to take a series of photographs of the people of that island as they went about their everyday tasks. His film premiered in the presence of the Prime Minister and the (now) Queen Mother and was made in the same year as two other internationally recognized masterpieces - "Man of Aran" and "Triumph of the Will".;Interned in the Tower of London, he survived the war and managed to have his mother and the family fortune smuggled out of Germany in 1945, a year after his only surviving brother committed suicide whilst under sentence of death for his involvement in the "Colonel's Plot" against Hitler. In the post-war years he succeeded in picking up his Western Isles connections whilst frittering away almost #2 million, until eventually he had to earn his living as a part-time writer and photographer in the Scottish Borders.;"A Poem of Remote Lives" is the title of Kissling's only film and an apt description of his own enigmatic existence, detached and protected by his wealth. His legacy of photographs, writings and friends is rich and varied. 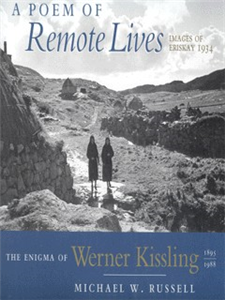