A Physicists Labour In War And Peace

This informative book covers the pre war period to the 1990s spanning the author s experience of the rise of Nazism on the continent, his research and his involvement in the planning of Science and Higher Education in Britain. He gives a wry commentary on education and science in Britain, and describes his role in pressing for adequate funding for science, especially during the Thatcher era. His research in Edinburgh with the future Nobel Laureate Max Born, one of the giants of Theoretical Physics, led to a breakthrough in solidstate physics. In Manchester he worked with Patrick Blackett, also a future Nobel Laureate, measuring Extensive Air Showers . These are sprays of particles, which fall on the earth generated by nuclear particles from the cosmos. Later in Leeds he was one of the initiators of the National British Air Shower Experiment. He writes about some of the famous scientists he has met, and also of his disappointments which are often the fate of a working scientist. This is not a rounded autobiography. Much of the book is concerned with Kellermann s research in solid state and cosmic ray physics and his interaction with outstanding physicists of the time, notably his work with Karl Przibram in Vienna and later with Max Born, Patrick Blackett and E C Stoner, and his meetings with C F Powell in Great Britain. There is also an account of his meeting with Max Planck, his discussions with the later atom spy Klaus Fuchs and other notable scientists of the period. It is concerned also with British science policy and Kellermann s commitment to promote support for science by British governments of the day. But a life in physics spanning the second half of the twentieth century is also likely to be a life deeply marked by warfare, antiSemitism, and disruption. These intelligently written memoirs (Professor Geoffrey Cantor, University of Leeds) offer perceptive assessments of contemporary events and of many of the scientists and politicians Kellermann encountered. The Leitmotiv during Kellermannss later years was his research on cosmic ray extensive air showers. The nonspecialist will find a clear account of how these showers, caused by enormously energetic particles from the cosmos are clues to its understanding, an account leading right up to the present state of the art. 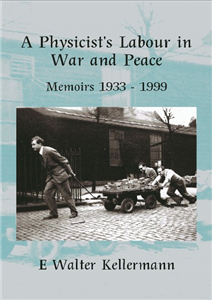