A Century of Subways

"I declare the subway open", said Mayor George B. McClelland on 27th October, 1904. New York was moving uptown and everything was about to change.;This book is a tribute to the world the subway created. Looking at one of the marvels of the 20th century, Cudahy creates a sense of this extraordinary achievement, showing how the city was transformed once New Yorkers started riding in a hole in the ground. The hero of the story is August Belmont Jr., the banker who risked a fortune to finance the building of the IRT. Cudahy also compares he experiences of Boston and London' subways and explores the impact of the new IRT on New York's commuter railroads, and later on rail transportation from Buffalo to Los Angeles. 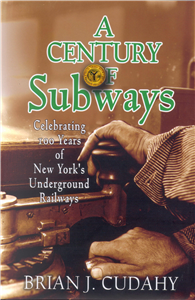