500 of the Most Witty, Acerbic and Erudite Things Ever Said About Politics

Politics continues to fascinate. The political parties may, on the surface, appear very similar in outlook, approach and policies, but underneath they are as tribal as they ever were. Politicians are caught in a quandary. On the one hand people say "why can't you just agree with each other?" but on the other hand they demand a real choice. After all, if you can't tell the difference why on earth would you bother to get out of bed on a wet Thursday morning to go and vote?The 500 hand picked quotes in this book take you through the whole political process, from defining what politics is through to standing for election, making speeches, holding power, being involved in scandal and finally, bowing out.The overwhelming theme is that politics can be fun and humorous. Some of the humour is intentional but much is not. Take a parliamentary question from Dame Irene Ward MP during the war: "Is my right honourable friend saying that Wrens' skirts must be held up until all sailors have been satisfied?" And frankly, you can't really follow that, can you?500 of the Most Witty, Acerbic and Erudite Things Ever Said About Politics is a must have for anyone involved in, writing about, or simply interested in politics in the UK today. 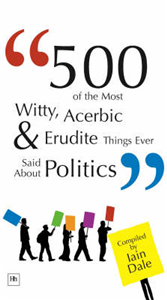