365 Things That Make Ya Go Hmmm

“365 Things That Make Ya Go Hmmm - Wisdom & Wit by William” are thoughts, expressions, sayings, and humor that William has shared with his celebrity clients who simply needed someone to put a smile on their face. William Murrell is the limo driver to the stars. They love him, they trust him and they visit him time and time again to laugh at his wisdom & wit.

These thoughts often originate from others - many from the celebrities who have sat in his backseat. We do not claim originality, we only claim they will lift your heart, speak to your soul, and make you Happy. 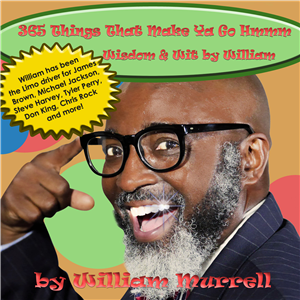 William Murrell has been the Limo driver for James Brown, The Godfather of Soul, Michael Jackson, Steve Harvey, Don King, Rev. Al Sharpton, Sharon Stone, Chris Rock, Tyler Perry and Phaedra Parks of The Real Housewives of Atlanta…as well as golfers Rory Mcllroy, Sergio Garcia, and Mark O’Meara. These are just the first 10 on his list of famous clients.

William tells each story with a twinkle in his eye and a smile that penetrates your soul. We live in a world that needs more happiness and that is William’s calling.

In William’s own words: I hope that these 365 thoughts inspire you, lift your burdens, warm your heart and bring a smile to your face.