Death of Rugby, The

by Neil Back, with Dean Eldredge

Fourteen years since his autobiography, Size Doesn't Matter, English rugby's most decorated flanker, Neil Back, returns with a tale of triumphs, heartaches and broken promises. From his anti-hero role as 'The Hand of Back' in Leicester Tigers' European Cup triumph over Munster, to Grand Slam glory and the 2003 World Cup with England, Neil is never far from the story. The Death of Rugby dissects the Lions' disastrous 2005 tour of New Zealand, the ousting of his mentor Dean Richards from Leicester Tigers, and Neil's three years in charge of Leeds, before being recruited by The Rugby Football Club, and why Neil and his colleagues had to walk away, despite an unbeaten season, and league and cup double. Neil deals with the adjustment from professional sportsman into family and regular working life, despite a critical illness in 2013, which has shaped his perspective on life. 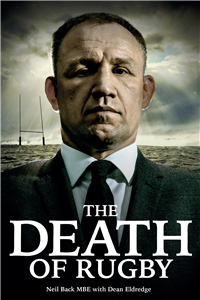 In 2003, Neil Back was written into rugby history, winning the Grand Slam and the Rugby World Cup with England. He has since coached at Leicester Tigers, Leeds, Rugby Lions and Edinburgh. Dean Eldredge is the Communications Director of Soar Media and Oporto Sports, and has has worked in sports media and marketing for over ten years.